I’ve already posted my third passage over at Beth’s Blog and now I’m adding it here 🙂 My plan is to memorize Proverbs 3:13-18 between now and March 15th. So I’ll be working on 2 verses each two week cycle. This segment will be Proverbs 3:13-14.

I haven’t started decorating this one because I don’t have a purple highlighter but I will update this post with a completed photo in two weeks:

Sweet Fancy Moses! It’s a new year! I’m really looking forward to setting and achieving the goal of memorizing 24 verses/passages again in 2017! It’s not too late to join in, just head on over the Beth’s Blog for more information.

Today I’m posting the scripture I’ve chosen for January 1-14th. It is 1 Thessalonians 5:23-24. We’re also using this passage as the basis for a 12 week renewing the mind challenge at the Taste For Truth Support Group. When I was considering which verse(s) to memorize first, this just seemed like a natural choice.

As part of the memorization process, I plan to decorate each index card. I’ve already started on this one: 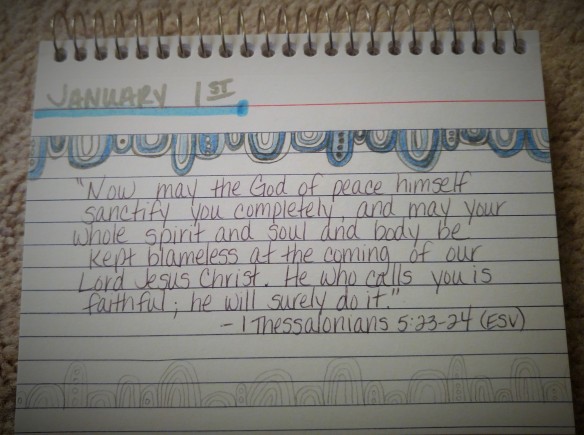 Coloring, drawing, or even exercising while I practice scripture seems to help me memorize it quicker. I really don’t know why, but I’m sure there has been some scientific study to explain it… or maybe I’m just weird, which is highly possible.

Speaking of goals, I’ve been making a list of personal achievements for 2017. I’m still not finished with it because I’m using a combination of Zig Ziglar and Dave Ramsey tips for goal setting. This is a tedious process, but I think it will help me focus in the coming months on what is truly important.

Obviously, one of those goals is to end the year with 24 newly memorized verses/passages. I’d also like to go to the end of year SSMT celebration (which is part of my financial goals).

May your 2017 be filled with all manner of blessings! 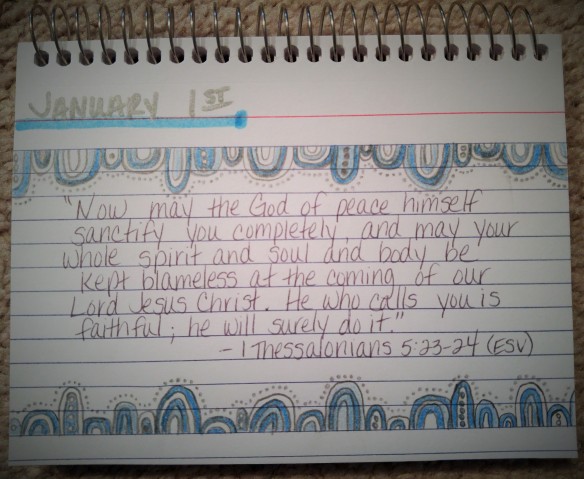 I really think the summer is flying by just a little too quickly. My to-do list seems to be growing instead of shrinking, as the days are disappearing. I didn’t realize how much participating in SSMT would magnify the words of my verse 1.

Today we get to post the 12th verse in our memory list, so be sure to check out Adrienne’s post to the Siestas. I am still going through Psalm 103, so, big surprise, the next verse is:

For as the heaven is high above the earth, so great is his mercy toward them that fear him. ~Psalm 103:11 (KJV)

When I was a kid, I pictured “fearing the Lord” as cowering like the cowardly lion before the “great and powerful Oz”. I thought the Bible was telling us to “be afraid, be very afraid.” And then I memorized verses like, “fear not, for I am with thee”. Talk about confusion for a little kid. Well, God used a lesson from my Dad to teach me about “fearing the Lord”.

I loved to swim. Growing up in a part of the country where sun and surf were king, suited me so well. If there was a body of water, and my parents gave me permission, I was in it. We would go to the lake and to the beach. I loved the water. I had not even an inkling that the water could be dangerous. I remember my Dad teaching me how to dive off the side of a pier from a squat and later from standing. Oh, I didn’t know how to swim like a competitive swimmer, my swimming was more utilitarian than that, but I loved challenging the limits of my breath, arms, and legs. I only got out of the water when I had to.

I must have freaked my parents out a few times because I remember my Dad saying I “had no fear” when it came to the water. I was in the second or third grade at the time. “You want me to be afraid of the water?” I asked. This seemed to contradict an earlier lesson in fear regarding a huge horse at a festival.

“Well, not afraid of it, that’s not good either,” he replied.

“I don’t understand.” I was treading water in the deep end of the pool at our apartment complex. Secretly seeing how long I could appear to hover there before my arms and legs gave out.

“Water can be very dangerous and you don’t respect that part of it.”

I’m sure I gave him a confused look. I had been taught to respect my parents and those in authority over me. I didn’t get how that applied to water. He shifted gears.

“Would you play with a rattle snake?” He continued.

“It would probably bite me and I might die.”

“But you don’t run screaming if you see a snake either.” He was right, I had been around a number of snakes, and just over a year later would even catch a pigmy rattler on the driveway of our home (using precaution of course). “You act appropriately around snakes because you have a ‘healthy fear’ of them. You respect them. You need to respect the water like you do snakes.”

I remember being really confused because I didn’t see how water could be dangerous if I knew how to swim. Over the years, I did have several close encounters with water, and by the grace of God, I survived them. Some were because of my recklessness and some were just fluke things that there was no way I could have prepared for. Years later as a teenager, when a large wave smashed me into the ocean floor and began dragging me out with the undertow, my Dad’s words flashed through my mind. We had been warned that the undertow was particularly bad, but I still got in the water. I clawed at the sand and held my breath for all I was worth. I remember praying that God would help me. The force pressing me into the sand lifted and I was able to surface. I got out of the water and sat on the shore for a good while watching the waves crash. Unfortunately for a 21 year old man staying a few doors down from us, the undertow claimed his life that day. My respect for water changed. I didn’t fear it, but I definitely approached it with more respect from then on.

When we are told to “fear God”, we are to have a proper view of who God is and what He is capable of. We aren’t called to cower out of fear, but to humble ourselves out of respect. God could easily force us to do His will. He could smite us all without speaking a word. We forget sometimes that He is the Creator of all things. He’s the one who quiets the storms or raises the flood waters. He’s even the one who allows waves to smash us into the sand for a lesson we so desperately need for our own good. But He’s also the living water… our salvation and our deliverer who washes away our sins. He wants us to choose to love and respect and obey Him. If we do, He promises mercy… and “so great” mercy at that.

“He hath not dealt with us after our sins; nor rewarded us according to our iniquities.” ~Psalm 103:10 (KJV)

This is another way of saying, “God is merciful”. The funny thing is, God is far more merciful than mankind. We are critical of others and ourselves. One thing I’m learning from my journey through Thin Within is that God’s grace is sufficient. This allows me to let myself off the hook for not being perfect. This doesn’t mean I’m saying, “Oh well, God forgives.” No, it means I recognize my errors without condemnation while relying on God to change those behaviors.

The Bible tells us the “wages of sin is death”. I don’t know about you, but I’m mighty thankful He doesn’t “reward” His children “according to our iniquities”.

Beth shares her heart with us today regarding loss. Be sure to check out her message.

Ok, now I really need to get some stuff done today. Blessings!

Good Morning! It’s already May 15th and that means it’s time to post the tenth SSMT verse of the year. I’m still working through Psalm 103 so today’s verse is:

I’m going to have to pray about the full meaning of this one and get my hands on some commentary too. Be sure to check out today’s post over at LPM Blog. It’s rather short, but sweet.

Oh my goodness. I’ve been so caught up in the Thin Within series that I totally flaked posting my 8th verse yesterday. I didn’t even think about it being May 1st already.

So, I’ll make this quick. I’m still moving through Psalm 103:

The Lord is merciful and gracious, slow to anger, and plenteous in mercy. ~ Psalm 103:8

So glad this is one of the shorter ones. I think this verse is perfectly timed as I need “plenteous” grace and mercy at the moment.

Tax Day (do you hear the ominous music playing?). I am so not thrilled to write that check to Uncle Sam… he’s become a nasty, greedy bugger in his old age. I refuse to let his greed overshadow today’s SSMT celebration though… well, I’m going to try not to let it. Lord, help me!

Today is SSMT verse # 8. I’ve already posted at LPM blog. Be sure to read Diane Vaccaro’s message today. I’ve got a really busy day ahead so I’m going to get right to posting my verse. I’m continuing through Psalm 103:

He made known his ways unto Moses, his acts unto the children of Israel. ~ Psalm 103:7

Tomorrow will be the first post in my “Thin Within” series. Until then, I hope your April 15th is one of grace and beauty.

You Bet I Voted!

Brick by Brick
Blog at WordPress.com.