This was a tough week as I was going through some detox and fatigue.

Week 11 of The Beginning Runner’s Handbook run/walk schedule began ok and then I made some dietary changes which knocked me on my rear (more on that later).

On the 11th, I went for an additional walk with a friend, which felt fine… but the morning of the 12th I wasn’t feeling so well. I decided to take that day off and resume with session three on the 13th. Unfortunately, I felt worse the next day and had been up all night in pain from head to toe.

Apparently I needed the rest because on the 14th I got up and busted out that workout hitting new records for “fastest mile” and “fastest 5K” since I started 11 weeks ago. 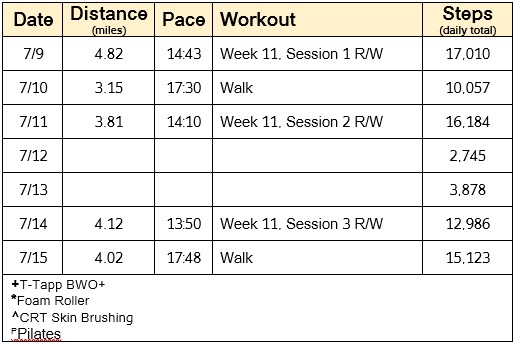 I know I did some T-tapp, foam roller, and skin brushing this week but I failed to write down which days I did what, so I’m just not including it in this week’s chart.

Sunday was day 84 on the nutritarian diet, but I added juicing, green juice powder, and a multi-vitamin on Monday. I’m following Chris Wark’s recipe from ChrisBeatCancer.com. I make about three times his recipe and it produces 30-40 oz of juice. I divide this up into three jars and have it between meals with a scoop of the green juice powder.

It felt like I had a shot of caffeine that first day. Immediately felt more energized. By Wednesday afternoon I was beginning to show signs of detox though. I began running a low grade fever, my stomach was upset, and then I got a fever blister on my face. By Wednesday night I was in pain from head to toe. Everything hurt and I couldn’t sleep. I ended up taking a pain killer, but still only slept a couple of hours.

I decided to press through and keep up with the juice. This required renewing my mind about it because I seriously wanted to quit. I mean, cleaning out the juicer is a pain, and if I’m going to feel crummy too… ack! Lots of prayer and reviewing why I was doing this in the first place. Thankfully, the Lord brought me through.

I would have periods of time where I had outrageous energy and then I would feel so sick I didn’t want to move. By Saturday morning I felt better and even felt like if I didn’t get in some exercise I was going to explode. I started craving the juice and exercise. I even had moments where it seemed my body was “revving”. I haven’t felt that in decades. My overall body temp seems to be running hotter than it has been as well. I’ve thought about taking some temps with my basal thermometer to see if there has been a shift there. I don’t see how it hasn’t shifted because I’m warm all day long and have had to reduce the number of blankets I sleep under or I sweat through my clothes.

I do want to be clear, I’m not doing a cleanse or a fast. I simply added more nutrition in the form of juice, green powder, and vitamins to my normal eating routine (nutritarian). Since my weight had slowed significantly, and I’m guessing it’s somewhere around my “sticking point”, I thought maybe my body struggles to get past there because it thinks it has to hold onto the fat as some sort of defense mechanism (long story). So, after prayer and research, I’m trying this experiment to see if a larger influx of nutrients will signal it to let go.

As you can imagine, I was nervous about stepping on the scale… I mean, I’m ADDING stuff, not taking things away… and I skipped two whole days of exercise. Plus, the lovely monthly was here in full force on weigh in day…. and I had hardly slept the night before…. oh, and I had potatoes for dinner lol…. So, you can imagine my surprise when the husband told me I had released 1.4 more pounds. Say way?! Thank you, Jesus!

I did take Sunday off from juicing, but resumed Monday morning. I guess it’s time to move on to week 12.