My emotions have been all over the place this past week… taking its cues from the weather I guess. Crazy weather (crazier hormones), but we managed to stay the course.

We got in all three scheduled workouts (The Beginning Runner’s Handbook), and added two more people to our little walk/jog group. We ran in the cold and rain this week, and decided we felt hard core for doing so. Plus, we had to work around an out of town jaunt to experience the Newsboys united tour concert.

I’ve added my daily step total to the spreadsheet. Obviously, I do more walking than what is indicated by formal workouts. Since I’m actively trying to reach my step goal now (10K/day), I thought it should be listed. Nothing super exciting to report from this week, except that attending a concert is very conducive to racking up steps.

I did earn a few more Garmin Connect Badges in the past two weeks. I think the coolest one was called “well oiled machine”, which I received for improving my running VO2Max levels.

I’m not paying attention to those numbers right now (although, eventually I will care), but it’s cool to get notified that something improved.

Yes, we’re still doing that nutritarian diet thing. Even more impressive is that we were able to do it on a weekend road trip. How? We took our meals with us. That’s right, I planned ahead and packed all our food for two days.

Normally, we eat in the car, but it’s rather difficult to eat a salad while you drive, so this time we built in a little extra travel time to stop and eat lunch both days. We ended up eating outdoors in the sunshine and it was such a nice break in the drive. One of the times we even ventured off the beaten path to a quiet little park… birds chirping… breeze blowing… lovely.

I cannot tell you how badly I wanted junk food over the weekend though… oh my goodness! Clearly, snacking while on a road trip is heavily ingrained in my system. We did chew gum, which helped a bit.

After the concert, we were exhausted and my mind kept going to our normal routine of grabbing take-out on our way back to the hotel. We had eaten the Tailgate Chili I brought at the hotel before we headed to the venue, but we were so hungry after hours of worshiping with the Newsboys. 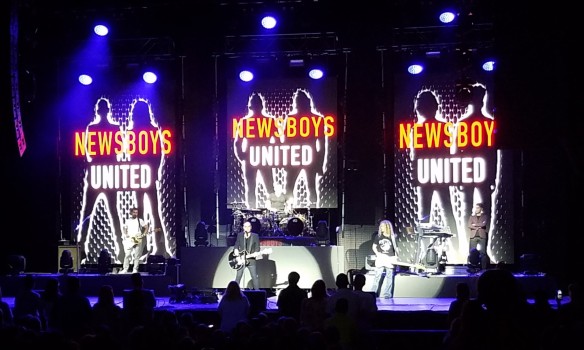 Of course, after singing about breakthroughs (Zealand) and being free (Peter Furler, Newsboys), I certainly knew I wasn’t going to cave, but I was genuinely famished… and sweating (Texas is warm). Fortunately, the 14 year old had made us a “strudel” recipe she found in my Eat to Live Cookbook. So, we had that instead instead of our usual junk feast. Yum!

Sunday, when we rolled back into town, we had to shower and head back out for the 15 year old’s piano/voice recital. I cannot even begin to describe how strong the urge for french fries was. I was whining about it to my husband, but mentioned I was afraid I’d gain weight if I ate them. He replied by asking me if french fries were good for my thyroid. Um, no, not at all. Well played, Husband!

Plus, I truly feel God has asked me to give up certain foods for now and eating french fries would certainly be acting in disobedience for me. We didn’t have french fries, but we did have a frozen fruit “dessert” that the 14 year old made in our own kitchen that night.

So, how did the scale pan out last Friday? My body released 1.2 more pounds. At first I was a bit disappointed, but then I renewed my mind about the scale and was able to thank the Lord instead of grumbling. The fact that the scale is actually moving should be a celebration when you’re working up against thyroid issues.

Another week has passed, and now it’s time to focus on the current one.