I had a very different post in mind for my next one, but when the Lord blinds you temporarily… it might be a good idea to listen to (and do) what He says.

I turned on the scripture lullabies I listen to almost daily. I always put them on “shuffle” so the songs come out random (although there is nothing random with God). I do have to choose a song to start with so I picked, Be Still and Know. The second song told me what He wanted me to hear… the next two songs confirmed the message without a doubt. And as I pause to consider what to say… many songs later, He brings the same message up in another song.

And here we are, at the keyboard with one eye open and the other patched, poised to deliver this simple message.

He loves us so much that even in the midst of our sin… in our pits… our strongholds… our addictions… our unfaithfulness… (Romans 5:8) 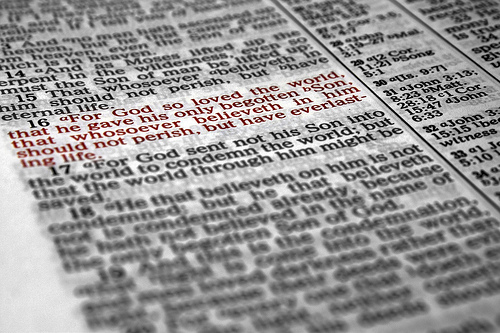 He didn’t just send His Son to earth to live amongst us, He sent Him to die in our places. And not just to die, but to be tortured and beaten before He would endure a barbaric crucifixion. During which, Jesus would pray for mercy for us… the very ones responsible for His pain. Yes, every sinner is responsible… and the Bible tells us, “All have sinned“.

The One True God, that’s Who.

Because God Loves YOU!

Then, three days after His death… after the guards had shoved a spear into his side to ensure He was dead… three days later, He rose from the grave.

He died for YOU!

He conquered death for YOU!

And for what? So that we may be called His children. So that those who put their trust in Him might be saved and live with Him eternally. To set us free from the law of sin and death.

Behold what manner of Love the Father has given unto us! (1 John 3:1)

God forbid we should forget what Jesus endured to bring us everlasting life. He gave everything. Everything.

Because He loves YOU!

37 Yet in all these things we are more than conquerors and gain an overwhelming victory through Him who loved us [so much that He died for us]. 38 For I am convinced [and continue to be convinced—beyond any doubt] that neither death, nor life, nor angels, nor principalities, nor things present and threatening, nor things to come, nor powers, 39 nor height, nor depth, nor any other created thing, will be able to separate us from the [unlimited] love of God, which is in Christ Jesus our Lord. ~Romans 8:37-39 (AMP)

Songs for your listening enjoyment 🙂

In case you are wondering, the moment I finished writing the bulk of this post, my eye stopped hurting and I was able to remove the patch.

Be still and know…