Several weeks ago we ripped out the pantry, some cabinets, all the countertops, and the kitchen sink. We rolled all of the appliances into another room, except the microwave, which stayed affixed till this past weekend. Unplugging that last device pushed me over the edge.

I remember thinking it would be “fun” to be without a kitchen for a little bit. Boy was I wrong. The fun wore off about one week in. Now, I try to avoid the entire first floor of our house because it looks like my kitchen threw up everywhere (even in the basement).

Chaos doesn’t give me warm-fuzzies, so I’m really not sure what I was thinking. It took years for me to “get over” general messiness that happens when you have six people living in the same house… but downright chaos? I haven’t grown that much apparently.

The FlyLady considers chaos an acronym meaning “Can’t Have Anyone Over Syndrome”. Yep, that about describes where we are.

My boundaries stayed in tact for about that first week, and then chaos stomped them to death. Here I am, day one of the official start of an online study group I’m hosting, and I’m scrambling to find those boundary lines. In fact, I’ve been trying to regroup for a week now.

I’ve come to the conclusion that my previous boundaries do not fit the current environment of no stove, no microwave, and nothing that requires washing. My trash can is filled with take-out containers and the remains of boxed/bagged foods boasting long shelf-lives. We have several gallon jugs of drinking water scattered about the temporary kitchen.

Two of the folding tables I was using for “counter space” in my fake kitchen are now eating up real estate in my family room where they are covered with cabinet doors in the process of being refinished. This means we’re digging through kitchen stuff on the floor and have no use of the family room.

The dog is beside himself.

I’m over it and beyond ready to get my kitchen back. Most of the counters are supposed to go in on Wednesday, but I’ve got probably 2-3 more weeks before it is fully functional again (yep, much of it is DIY). So, instead of continuing to try to keep boundaries which do not work in this environment, I’m changing them.

It has taken me a few days to decide what they should be, but I woke up equipped with a plan…

… and I broke them after lunch today.

Hmph. That’s right, day one of the new boundaries and I fell for the old “it’s just one bite outside your boundaries” lie. One bite became about seven and it was only capped there because my hand hit the bottom of the bag (which is now in that aforementioned trash can).

I’m thankful for the bottom of the bag though, it sure beats “rock bottom” (which I hope to never see again). It was the pause I needed to say, “what kind of lies are you listening to, Jules!”

The instant I found a quiet moment, I got alone with God and did some Truth Journaling. If you don’t know what that is, check out this post by Barb Raveling. And if you want to see a small sample of one of my entries, you can look here. 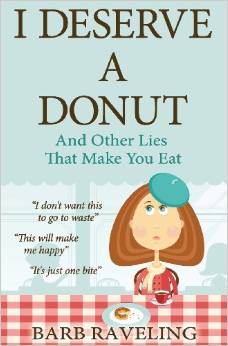 After that, I went through some questions from I Deserve a Donut pertaining to the root issues revealed during the Truth Journalling session. When I actually break my boundaries, I make myself write the questions and answers in my journal… so that’s what I did.

Next was scripture. I read through some passages that applied to my situation.

When finished, I felt so much better. I knew the problem wasn’t the new boundaries. They will most definitely fit in my current chaos, but like all boundaries, they still require me to sacrifice my “right to have whatever/whenever”.

The problem was my focus. I turned to food instead of God, which is often easy to do in the midst of chaos. Praise the Lord, God is faithful and His grace is sufficient!