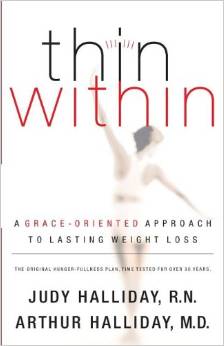 Today was rather crazy. Admittedly, I was not in the mood to do the study today. I tried while I was in the study room at co-op, but I simply couldn’t focus enough to do all the exercises. And then when I got home, I was too tired. So, some of this is from Day 14 and some was completed the morning of Day 15.

Today asked the question “who has God created you to be?” This can be such an overwhelming question to this recovering perfectionist… and to tackle it on such an exhausting day… well, I simply wasn’t in the mood.

We revisited the eagle story, which I still love. “I am an eagle, not a chicken!” It’s not enough though to believe you are an eagle. Yes, that’s where it begins, with belief, but if we truly believe, our actions will follow. I will act like an eagle if I the belief is my foundation.

If God had not intended the eagle to fly, stepping off the cliff with or without wings spread would have proven disasterous! ~ Thin Within (p. 139)

So, we have to know who God has created us to be before we jump off clinging to a belief. God’s word tells me that “if anyone is in Christ, he is a new creation; the old has gone, the new has come.” (2 Corinthians 5:17) In Ephesians I learn that I am “God’s chosen people, holy and dearly loved.”

Now, you may be wondering, “why on earth is the author harping on all of this – haven’t we already covered ‘who we are in Christ’?” Well, I don’t know about you, but if I had this belief down in my inmost being, food and body image laws wouldn’t have such a strangle-hold on me. If we don’t “get this” truth, we might as well stop because we won’t be able to live victorious 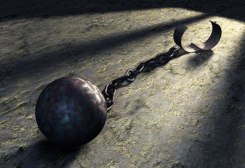 us for longer than it takes for our willpower, resolve, and strength to give out… which isn’t long.

For sin shall not be master over you, for you are not under law, but under grace. ~ Romans 6:14 (NIV)

A reminder, “eating” isn’t sin. The sin is turning to something other than God. The sin is trying to “fix ourselves” in our own power. The sin is in conforming to the world’s views, standards…etc.

I love how the author also talks about what happens when we “blow it”. She asks the question of whether or not God is grieved “by my willful reluctance to surrender all unto Him or to my lack of faith to claim the power of the Holy Spirit”. To this she responds:

He is grieved because we, as His beloveds, are missing out on His very best. ~ Thin Within (p. 142)

If you’ve got kids, think about this in regard to them. You tell them to do something and you already have in mind a “reward” you’re planning for a job well-done. Unfortunately, your kid decides to blow it off and either not do it, or does a very poor job. Sure, part of you may be angry (we’re human after all), but isn’t there a part of you who is disappointed that you can’t bless that kid with what you’d planned? Yes, I can relate to this.

Fortunately, God is a perfect parent (which may be difficult for us to fathom being imperfect parents). He has our best interests at heart, always. He knows what we’re capable of in Him and He longs to bring that to fruition. However, even though we mess up, He will never break His covenant of love.

The author goes on to describe an “obedient life” using a quote from one of my favorite Bible teachers on the planet. Beth Moore is like my big sister (in Christ) – yeah, I know I’ve never met her in person… but so what. Anyway, this was taken from her fantastic study, Breaking Free:

Obedience does not mean sinlessness but confession and repentance when we sin. Obedience is not arriving at a perpetual state of godliness, but perpetually following hard after God. Obedience is not living miserably by a set of laws, but inviting the Spirit of God to flow freely through us so the power to be victorious comes from God and not from us. Obedience is learning to love and treasure God’s Word and see it as our safety. ~ Beth Moore, Breaking Free

This is the part that I didn’t fill out until the morning of day 15. We were asked to come up with lies we still believe. I’ve already been addressing these lies for a bit now, so it was hard to come up with some that I firmly still cling to. Most of them are cracked and breaking apart. God did show me that I am still relying a whole lot on my own strength, not just to follow the 8 keys and completing the daily lessons, but also to keep up with the writing of this blog series… eeekkk! Can we say, “hello, conviction”!

After addressing the lies, we were given a list for replacing false beliefs with truth. I really liked this list. Then we applied one of these truths to the visual aid on page 148. Neat exercise. Really hope you have the book 🙂

A Note About the Medical Moments

While, I have mostly agreed with everything in these so far, I still have to be very careful not to turn some of the information into “rules” or “laws”. I’ve been meaning to say something about it. Since today’s kind of hit me in an ugly way, I thought I would mention my thoughts on it. I am choosing to let God tell me what I should and shouldn’t eat. While I do accept that not everything is beneficial, I’m still keeping food “neutral” in my mind. Knowing something is better or worse for me has never been a strong enough motivator to force me to “eat healthy”. Besides, I trust God to naturally eliminate my desire for what He knows won’t work for my body and increase my desire for what does.

Like I already said, today was wacky. I was running behind schedule and stood in the kitchen chugging my coffee so I could get out the door on time. I didn’t have time for breakfast (coffee was it) because I hadn’t planned very well the night before (so not me). I left the house a bit on the hungry side.

The second “standing in the kitchen” eating incident was out of sheer anxiety over trying to avoid plopping on the sofa with something to eat. I was genuinely hungry, but I wasn’t calm or relaxed. I didn’t pay attention to what I was eating. It was like “grazing” in the pantry. I know I didn’t eat much because I definitely stopped before a “five”. I could call this an utter failure, but the victory is that I didn’t eat while watching TV. Yes, it was still a form of distracted eating, but it wasn’t pleasant in the least. I hated it, and I think that alone will be a deterrent from making this behavior a habit. 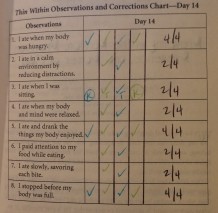 Now, there has been a bit of a change in the tv watching dynamics at our house. The husband and I decided to put a sitting area (with a tv) in our bedroom this week. I’m not going to go into all the reasons we decided to do this, but from the moment we started discussing it (months ago), I said, “NO FOOD in the room” (with the exception of some date nights). Even though the TV was set up last night, I went to bed when I realized I was having trouble watching it without thinking about food. (the husband got headphones so I wouldn’t be kept awake by it).

Well, tonight, I was having the same issue, but kept in mind the boundary I’d set – “NO FOOD in the bedroom” (except date night) – and begged the Lord to help me honor it. I could still go down to the kitchen to eat… which is what I did… hence, the whole standing about grazing thing. When I came back to the room, I didn’t hang in long with watching TV though, I ended up going to sleep instead.

Part of the reason I was ok with the sitting area in our room was that I wanted to break my pattern of sitting on the living room sofa eating while watching TV. Knowing that I don’t want food in my bedroom on a regular basis, I hoped this would be a physical obstacle to my old pattern of behavior. So far, it is helping… but I still feel that draw to numb out in front of that box with food. This is something I really rely on for relaxation in the evenings. The husband and I have been doing this for years after getting the kids tucked in. Even when I was dieting I would do this (I had “tv watching approved snacks” then). I believe the Lord will help me break it though.

So, the dynamic change, with the exhausting day… yes, I don’t see today as a failure at all. It was an opportunity to turn it over to God… again, and again, and again…. and again.

But now he has reconciled you by Christ’s physical body through death to present you holy in his sight, without blemish and free from accusation. ~ Colossians 1:22 (NIV)