Well, I guess I’m going to get to deal with some stuff during these 30 days. I knew I would, but I don’t think I realized it would be condemnation. I’ve spent the past few months getting rid of all guilt associated with food, and now, it’s trying to creep back in.

Today’s lesson was essentially about the difference between God’s way (grace filled alterations) and the world’s way (the swing between extremes). There is sooo much information in this chapter, and my brain is still a bit in a whirlwind over it.

I really don’t like the word “correction” as it pertains to food. I can apply the word accurately in other areas of my life, but there is something about that word in regard to food that generates the connotation of condemnation. I am certain it has a lot to do with my decades of “swinging between the extremes” (starve/binge/berate/repeat). Still, even by the end of today’s lesson, I couldn’t seem to reconcile it fully. I’m asking God to help me with that.

I also couldn’t get on board with saying that overeating (or eating when you aren’t hungry) is “sin”. That may be the case, but until God reveals that to me, I just can’t go there. I can say that it doesn’t honor the body He gave me, and therefore doesn’t honor Him. And again, this may have everything to do with my association with “eating sin” equalling “condemnation”. I know that’s not true in Christ, but I feel like if I call it “sinful” then my old diet mentality roars to life. So, I’m asking God to help me define things as HE defines them and not as the world does. I’m also asking Him to help me continue to replace those old beliefs with Truth (HIS truth).

Of course, that doesn’t mean I can’t say that ssin might be at the root of the overeating (yes, I know it sounds like “splitting hairs”). For instance, if I’m turning to food for comfort rather than “casting all my cares upon Him”, then I am treating the food as a god. That is idolatry, and I can most certainly call that “sin”. Likewise, if am bowing to a diet or to a body image or to my own strength… all of these are potential idols as well. So, it isn’t the food… or the eating of the food. It’s the underlying motivation that makes it sin.

Here is how this principle works. At any given point in time, you can choose to note any behaviors, beliefs, and attitudes that haven’t worked for you. ~ Thin Within (p. 36)

Ok, so I definitely understand this. I can see what hasn’t worked for me and has actually kept me in bondage. AND I can go so far as to recognize what could be a better alternative. I’ve talked about this a few times out here.

The author speaks of being under God’s canopy of grace…

…In this place there is no self-condemnation…

…We walk in faith and in the grace of God, not in our own ability to pull ourselves up by our bootstraps or to whip ourselves into shape…

…look to God for provision for your needs. What would otherwise be a life of extremes is now stabilized by the power of the Cross…

…If we attempt to move out from under God’s protective covering, we quickly discover that life consists of frustration and striving and goes nowhere…

Then the author talks about that pendulum that represents “self life”. It swings between the extremes. That illustration was actually very eye opening for me.

The legalist swings from feeling good about her accomplishments on the one hand, to realizing that she can’t keep up the pace on the other hand. ~ Thin Within (p. 40)

Yikes! I have soooo been there. I think the first couple of days of this thing, that person was trying to rise back to the surface as I tried to follow the 8 keys. As I was trying to come to terms with what the author was saying about grace and sin and self and all of the things I’ve struggled with in regard to food and body image… I felt a huge relief when she said:

It isn’t easy for many of us because we have lived for years with self-ridicule and self-condemnation rather than with the truth of God’s Word. ~ Thin Within (p. 42)

I think in some ways the “truth of God’s Word” had been warped into some worldly version that would support diet mentality and keep me in a destructive cycle.

While we were still sinners, Christ died for us. ~ Romans 5:8 (NIV)

I definitely could relate to the person quoted in the book who said, “Thin Within helped me build my life in the present. It freed me to enjoy and praise God while in process, rather than waiting until I had achieved my goal.” Naturally I would never say it, but the way I acted definitely said I was trying to get thin so I could be “good enough” to serve God, to have close friends, to be happy, to be satisfied…etc. What a ridiculous notion… on so many levels.

I’ll post the image of my observation chart below, but I want to close with these gorgeous passages of scripture:

Gasp – I’ll be memorizing those later in the year with the SSMT gals. Here’s another one…

Your love, O LORD, reaches to the heavens, your faithfulness to the skies. Your righteousness is like the mighty mountains, your justice like the great deep. ~ Psalm 36:5-6 (NIV)

Enjoy Third Day’s Your Love, O LORD and have a blessed day! 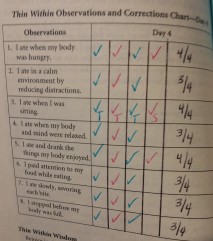