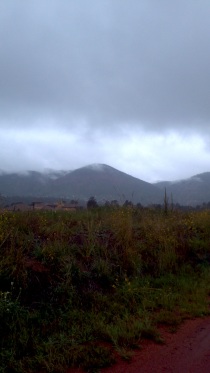 As many already know, Colorado has been hit by a barrage of rain. Many surrounding areas are flooding. At our house, we’re OK, just really wet these days. Of course, rain poses some issues for the runner… especially the trail runner. Parts of our trails have dangerous run off trenches, which makes running in the dark rather precarious. After our speed workout on a local track, we opted to go back to the track for our tempo run two days later because of how wet the trails were. Two days on a harder surface was bad enough, but with a torrential downpour during our running time the next day, we ended up at an indoor track (13 laps equaling a mile). Fifty two laps later and our joints were screaming (it was an easy run day). I couldn’t wait to get back on the trail… even with the hills.

Next came our first of back to back 8 milers. We opted for the trail. All was going fine. The Lord even delighted me when five deer bounded over a hill to my left, crossed the trail right in front of me and leaped effortlessly up the hill to my right. They were absolutely beautiful. I smiled and ran on until I came to a really steep decline with deep run off ruts. I knew the risk of going down it far outweighed my desire to continue in that direction. Even a twisted ankle could mean no starting line at the marathon for me. So I turned around… and this is where it became difficult. Usually, turning around means I’m on the home stretch for the finish line, but that wasn’t the case and let’s face it, eight miles is already long for this girl. I made a big circle hoping to eat up some more mileage before turning back. The circle was almost a mile, but it felt like so much longer. It was humid now, and it felt as though my shoes were sticking to the trail (mud maybe?). My legs hurt, my mind screamed at me to quit, and my stomach cramped (tried a new gel). I told myself that I’m supposed to be slower on the “easy” runs, but I wasn’t convincing. Slower means it takes longer and I know that full well. When I came over the hill and saw the Husband and the end, I was so glad to be done… but then dread set in over the next day’s scheduled 8 miler. 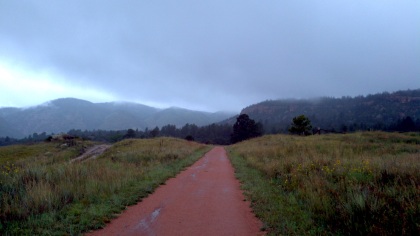 The next day, we overslept, which was a huge mistake for my mental game. Oversleeping meant we couldn’t get in eight miles before church and would have to do it after. Oversleeping also meant it would likely be a rainy run. Plus, I had plenty of time to dread the pain. That afternoon, we walked out to the trail, freezing with drops of rain pelting us in the wind. The Husband was concerned that we risked getting sick so we opted to hit the treadmill instead. I hate treadmills. He went to the Y and I went to the basement. After a half mile on my treadmill, I knew there was no way I would hang in for eight. No amount of music would keep my attention that long, and there wouldn’t be the motivator of being away from the house with no choice but to suck it up and run home. I went upstairs and had the Son write down a description of what I was wearing, what time I left and what direction I went (you can never be too cautious). Within moments I was out the door running. Oh the wind and rain were cold. I kept going. It began to feel like a baptism of sorts. Stress and anger and anxiety melted away. I walked a couple of times to take pictures because it felt like I was running in the clouds. 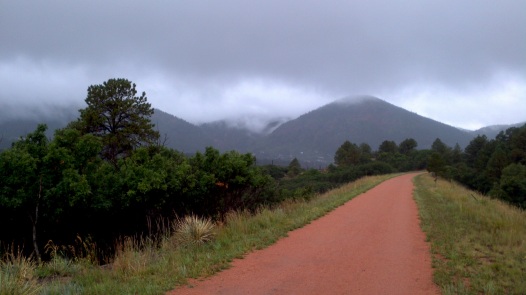 Surprisingly, my pace on the second 8 miler was better than the first (despite taking pictures). Plus, it was the fourth consecutive day of running (7, 4, 8, 8) so my legs are really fatigued. I guess technically I did 8.5 miles yesterday including the treadmill. I’m not as sore as one would think, but tired for sure. In the past I’ve often made comments about runners out in the rain or snow. This time I was that “dedicated runner girl”.