When I decided to do this 30 Days on the Raw Side challenge, my only goal was to finish the challenge.  With this in mind, I wanted to keep my meals as simple as possible.  I read countless blogs where others had attempted (some succeeded) in doing 30 days.  The general consensus of the successful finishers was to keep things as simple as possible, most of the time.

Of course, some people just love to prepare food.  Some want food that reminds them of the “standard American diet”.  They want this so they don’t feel like they are missing out.  This is understandable but I’m not one of those people.  I knew when we went vegan that I didn’t want to just recreate the SAD diet in vegan form.  With all of the vegan products on the market today, it would be very easy to do, but I would still be ingesting chemicals and good Lord, so much soy (at least it’s not high fructose corn syrup, right?)!  That doesn’t mean my family never eats food from a package, it just means we are purposeful about what that is and how much we have.

I feel the same way about going raw.  I wanted to enjoy the food that God created me to eat and in the most natural state I could afford.  However, if you’re eating raw, you will be met with a very serious dilemma.  Eating raw means you have to eat a higher volume of food in order to get enough calories each day.  It would be impossible to eat enough raw vegetables each day to meet my caloric needs because they are so incredibly low in calories.  So, then I had to decide whether I would eat high fat (nuts, seeds, nut butters, avocados, oils and olives) or high fruit.  Some raw vegans have a “fruit phobia” as Alison at Loving it Raw calls it.  These individuals eat mostly vegetables and fat, with forty plus percent of their calories coming from the fat sources I listed above.  During my reading, I found plenty of people who complained about the raw diet and discovered that almost all of them were in the high fat camp.  I even read about a man who had done two 30 day raw challenges (high fat) before doing a third with high fruit.  He said his results on high fruit were so much better than that of the high fat versions (and his blood sugar remained stable through the entire experiment).  The high fruit 30 day challenge ultimately convinced him to go 100% raw.  Yes, he felt that good. 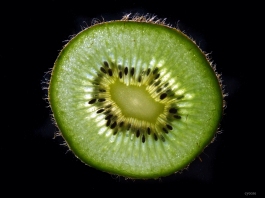 The people who seemed to have the most success ate high fruit and did very few formal recipes.  Eating high fruit is so simple and quite possibly the closest one can come to “garden of Eden” eating.  As Allison puts it, “If you think about how we would eat in nature, without the benefit of cooking facilities and utensils, spices and flavorings, you wouldn’t be too hard pressed to realize that fruit would comprise the majority of our fuel.”  Sure, nuts are good, but if you were trying to survive in the wilderness and you had a choice between a bunch of apples and a handful of un-shelled nuts, which do you think you would eat first?

I’m not an evolutionist by any stretch of the imagination but even this Creationist can admit that our DNA is most similar to that of primates.  No, I don’t believe we evolved from them but I do believe that the same God created us.  If our digestive tracts are so similar, doesn’t it stand to reason that we were designed to eat similarly?  So what do primates eat?  Fruit, leafy greens and some nuts.  In the wild, these animals must open nuts with a rock, yeah, they are not eating high fat.

What are the benefits of high fruit? For one, I don’t have to worry about getting enough calories or fiber.  Most fruit has ample water in it so it’s naturally hydrating.  The carbs in fruit give me so much energy throughout the day because my body doesn’t have to use energy to convert my food to energy (like it does with protein and fat).  I still get fats from fruit and leafy greens.  Even on the days that I don’t have any overt fats (those things listed above), I’ve noticed that I still end up with about 3% of my calories from fat.  Worried about protein?  I get that too from fruit and leafy greens (usually around 5%, which is all your body really needs).  Maybe you’re concerned about diabetes.  Well, that’s been reversed on a raw vegan diet too!

From a personal observation standpoint, the day after I eat overt fats and my fat intake goes above 5%, I don’t feel as good.  Sure, I still feel better than I did on the SAD diet, but once I began to reap the benefits of high fruit, my energy takes a noticeable hit when I add fats.

I hope this helps to explain why I choose to eat the way that I do as a raw vegan.  I do own a gorgeous RAW book with beautiful recipes in it.  I recommend it highly because it is so informative, but I consider most of those recipes to be the exception and not the rule for me.